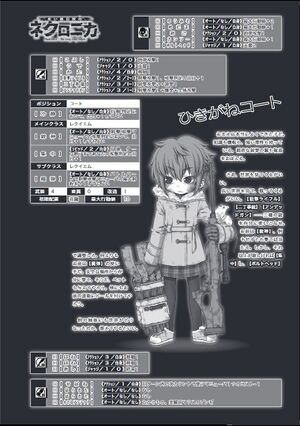 
Position: Court
Composure (Auto/None/Self)- You can gain +1 to the die roll on Action Checks.

Main Class: Requiem
Gun God (Auto/None/Self)- When you make an Attack Check for a Shooting Attack Maneuver, you may add +1 to the die roll.


Concentrate (Rapid/2/Self)- Until the end of the Round, all your Attack Checks gain +1 to the die roll.

Sub Class: Requiem
Magic Bullet (Auto/None/Self)- During the Battle Phase, when you make a Shooting Attack Maneuver, its maximum range increases by +1.

You're a girl who can do anything.
You've got knowledge, cleverness, and strong reasoning.
I remember and respect your sharpshooting arm.


Now, go out and see the world.
Come and see the wide world, come and fight.
[Sniper Rifle], [Twin Pistols], [Undead Gun],...... Freely use and master these three guns to your heart's content.
You're a [Gun God], you can hit even if you shoot without aiming.
But if you want even more, you can [Concentrate] and tune with [Bolt Head].
More than anything else you're a master at using the [Magic Bullet].
You can shoot as much as you want from a safe distance.
That's right, I also gave you a pet.
I'll add other dolls to your escort.


Your Sisters don't know much about the world, so teach them.

Retrieved from "https://nechronica.miraheze.org/w/index.php?title=Trigger_Happy_Court&oldid=1146"
Cookies help us deliver our services. By using our services, you agree to our use of cookies.